Here we shall look at using mechanical fastenings to join plastics, as well as various welding methods for permanent joints. 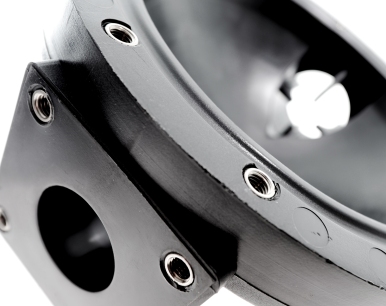 There are a wide variety of different fasteners – self-tapping screws, press-in and mould-over inserts, clips, studs, rivets etc, they can either allow disassembly for repair or be permanent fixings. However, they can cause local stress in the moulding either through their insertion or the moulding of the holes to accommodate them. If the component is to be exposed to wide temperature variations it must be remembered that the vast majority of inserts are metal and so will have different expansion properties to the plastic material. 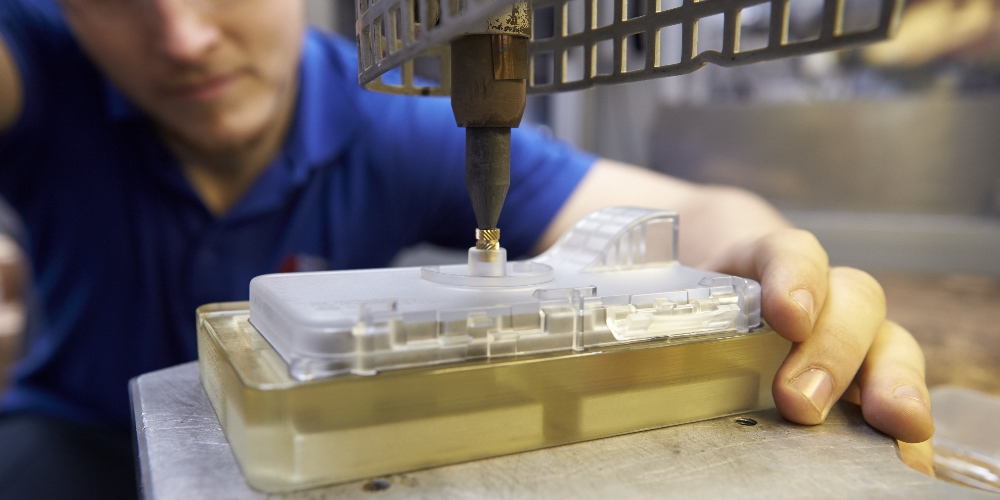 An alternative method of making a permanent joint is heat staking.  A pillar on one moulding is inserted through a hole in the part it is to be joined to.  This could be another moulding, a plate or printed circuit board for example.

Heat is then used to soften this pillar and a tool used under pressure to form a head similar to a rivet.  Frequently hot air is used hence the term heat staking.

Advantages are similar to snap or press fits:

As thermoplastics are poor conductors of heat, when designing parts that are to be joined using this method in assembly it is better to have a greater number of small stakes rather than a few thick ones.  Although the appearance is most commonly of a rivet head it is possible to achieve a flush finish by use of a countersunk head. 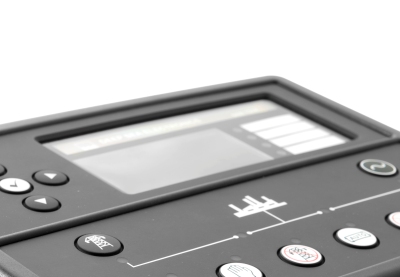 There are a number of different welding methods:

This is the most popular method and uses ultrasonic energy to create surface and intermolecular friction so generating heat and in turn forming a weld.  Ultrasonic welding is suitable for most thermoplastics.  Amorphous polymers are generally ideally suited, semi-crystalline polymers, on the other hand, are generally more difficult to weld ultrasonically.

This  involves rubbing together under pressure the two parts to be welded until sufficient heat is developed to cause the materials to melt at which point the motion is stopped and the parts allowed to cool forming the weld.  As with ultrasonic welding, most thermoplastics can be vibration welded although amorphous materials tend to be easier to vibration weld than semi-crystalline polymers.

Again this is a friction process and as the name suggests, is used to join parts with rotationally symmetrical joining surfaces.  One part is rotated while the other is held firmly, pressure is applied and the motion stops once the material is in a molten state in the weld zone.  This is the most efficient joining process for parts with circular cross sections.  Cylindrical parts up to 600mm diameter with a joint area as large as 58cm2 have been successfully joined using this method.

This uses inductive energy to achieve fusion temperature.  Again, this method may be used with most thermoplastics.  Before welding an electromagnetic welding material, such as a gasket, is placed between the two parts to be joined usually in a groove or other recess.  During welding an electromagnetic field is formed which heats the electromagnetic sensitive material, the heat is transferred to the surfaces of the parts to be joined and the parts soften.  Welding is completed with the application of pressure.

This is similar to induction welding except that an electrically conductive wire or braid is used in the place of electromagnetic material. An electric current is applied to the wire or braid which then heats up and softens the thermoplastic material on the two areas to be joined which can then be welded with the application of pressure. It is a quick and simple method ideally suited to very large parts. The wire remains in place which may weaken the finished weld.

This uses electrically heated tooling to soften the plastic part surfaces to be joined. The tool is then removed and the parts pressed together before the surfaces cool. This method can be used for all sizes of parts and almost any thermoplastic material. It is particularly suited to semi-crystalline polymers such as polypropylene and polyethylene. Unfortunately, the cycle times for this type of welding can be long, especially for larger parts.

This is used for very large parts although not usually injection moulded components as there are better alternative methods.

This evolved from hot gas welding. A V-groove on the part to be joined is heated using hot air or gas to soften it. It is then filled under pressure with an identical material which has been plasticised via extrusion. Once deposited pressure is applied. Usually used for larger sheet type structures.

FURTHER READING OR LINKS TO ALL GUIDES?

Free Design Guide
Free advice and design support are offered to ensure your design part is optimised for injection moulding.
GET A QUOTE