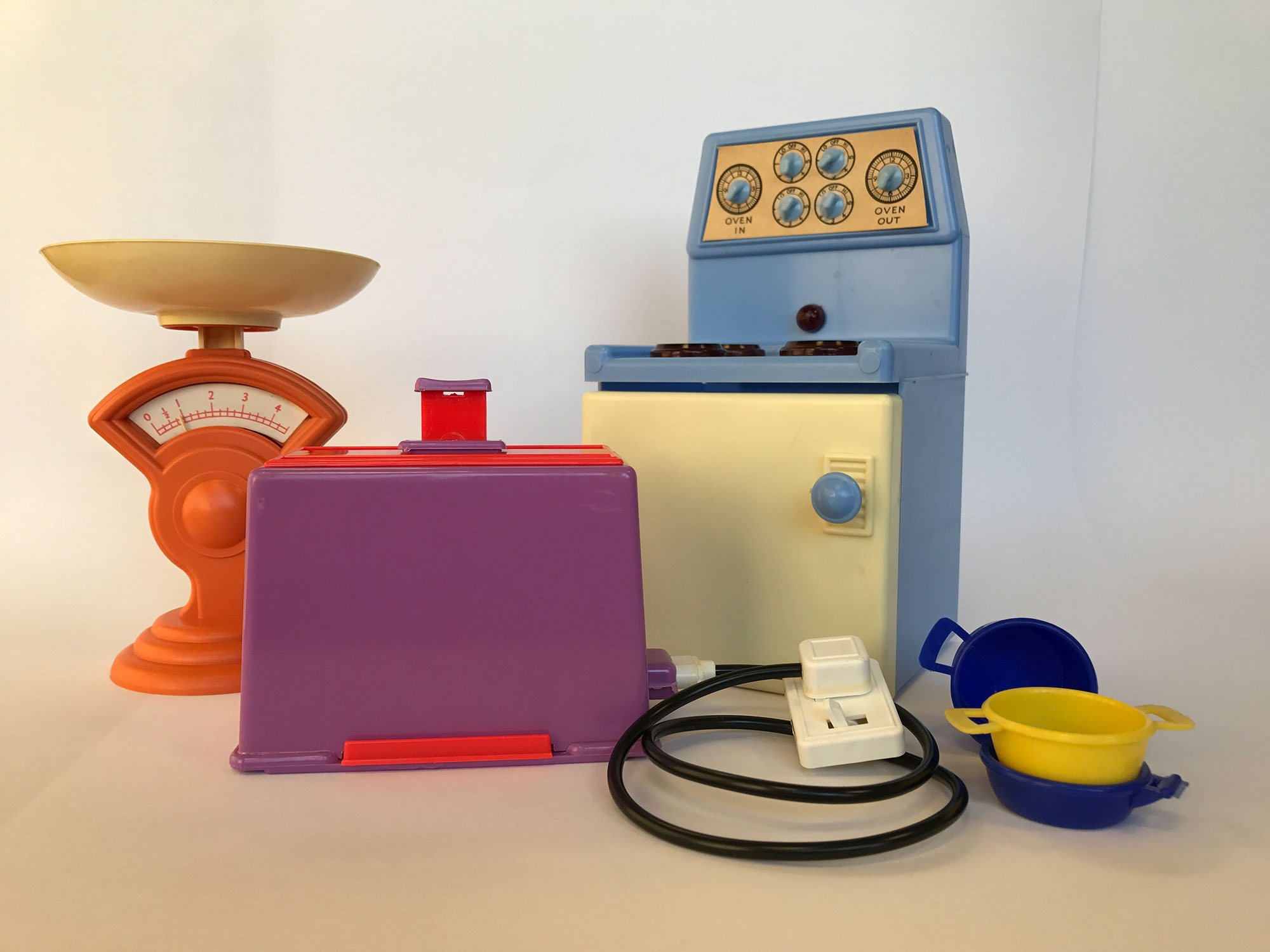 Rutland Plastics was established in January 1956 by Ron Smart and Don Ansell. The company started with two moulding machines on a site just 200 metres from todays' site.

Like many new ventures, there were sacrifices that had to be made to get things started. The two owners sold their cars to raise the money to pay for those first machines. Even moving into their new factory was not straightforward. The original building was an old corn mill and the millstone had to be removed to make room for the moulding machines.

In the beginning, the company moulded plastic flowers progressing to accessories for budgerigars as their popularity boomed during the 1950's, moulding all manner of toys for this popular mid-century family pet, from mirrors, ladders, little men that rocked backwards and forwards when pecked to feeders and bird baths. Later this developed into its own-brand of toys for children called ‘Rutland’ which went on to include the Katie range of domestic-themed toys. Most were moulded in polystyrene and quite brittle and it is unlikely that many survived the scrapes and bashes of a typical playtime.

A change in import controls and subsequent increased competition in the late 1960’s from Japanese, German and American toy imports saw a sharp decline in the sale of British made toys. Smaller toy manufacturers started to be bought out by larger companies looking to restructure and this included buying up toy brands. Some of the leading players were Lensey, Mettoy, Airfix and Dunbee-Combex and in 1971 Rutland Plastics sold the Rutland brand to the latter. Sadly, Dunbee-Combex-Marx was liquidated in 1980.

Rutland Plastics is now far removed from the toy market and is involved in a wide range of technical moulding work which first began when the company moved to its existing site on Cold Overton Road in the early 1960s. The new site was a former crop drying barn. By this time there were five moulding machines. Growth here was fuelled by the addition of more trade moulding work to include push buttons and nameplates for Ford.

In 1970 the company won a large export order from a Swedish Kitchen manufacturer worth £100,000 a year. By this time the firm was employing 70 people. 1977 saw Rutland Plastics celebrating its 21st Birthday with the opening of the first bay of the new moulding shop. This more than doubled the size of the factory with the new extension covering 12,000 square feet. Built at a cost of £250,000 it initially housed 10 machines although there was room for double that number. By this time the largest moulding machine in the company had a maximum shot weight of 2.25kgs.

In the same year the company secured a British Gas contract worth £500,000 p.a. Other products being manufactured included refrigerator parts, piano keys, components for the automotive and electrical industries, bearings and wheels for lawn mowers, parts for safety helmets, soles and heels for the shoe industry, advertising display stands and babies’ feeding bowls. Turnover reached £1m and the company now had 75 employees.

In 1979 the company was visited by the Duke of Kent landing in his helicopter on the school playing fields next door to the factory, although a month before the Duke's visit his office wrote to Ron Smart, joint founding partner of RP, asking if the other dignitaries involved in the one day county tour could leave their cars in the RP car park!

By 1980 turnover had reached £1.75m and employee numbers had increased to 80. Products now included high pressure gas fittings and rear scope lenses, placed in the rear windows of buses and coaches to assist drivers in seeing objects behind their vehicles, which we continue to mould today.

In 1981 the moulding shop was extended further adding 5,000 square feet of production area. 1983 saw the erection of a 6,000 square feet bonded warehouse built to accommodate the stockholding required for the British Gas contract. One year later, in 1984, the original factory was gutted and refitted with extra space allocated to toolmaking.

INTO THE NEW MILLENNIUM

For the third part of Rutland Plastics’ history, we pick up in 1986. There was now no doubting the strength and vitality of the business. By the mid-Eighties the company had real strength and vitality, turnover reached £3 million, with employee numbers steadily rising to reach 110 by 1989.

Rutland Plastics acquired its first patent in 1986: the Selectroweld fittings range, which took five years to develop and was patented jointly with Rutland Plastics’ customer (link electrofusion). Gas pipe fittings remained a staple product, but the range was extensive and varied; refrigerator parts, road lamps, medical products and electric fencing. The company attained BS5750 now known as ISO9001 in 1989, and in the same year it expanded yet further by buying half of a neighbouring hosiery factory. The size of gas fittings being produced at the factory increased and Rutland Plastics invested in an Engel 1250-tonne moulding machine with a shot weight of 18kg.

A staff size of around 110 employees has remained fairly constant since 1990. The company has a long history of training and developing its workforce. This was officially recognised in 1995 when it was licensed to assess and award NVQs. Four years later, Rutland Plastics obtained Investors in People status. Martin O’Neill, then Leicester City’s manager, presented the company with the award.

1996 saw the company purchase its first 3D CAD system: Pro-Engineer. Anvil 2D CAD was already in use at the factory, but the desire for the added benefits of 3D reflected the company’s forward-looking attitude. Investment in modern technology continued in 1998 with the addition of a Mitutoyo co-ordinate measuring machine (CMM). This was deemed vital for the quality control of the wide range of complex, high-specification mouldings that Rutland Plastics was by then producing.

In accordance with this pioneering spirit and zest for new business, the relatively new technology of Gas Assisted Injection Moulding was added to the portfolio of services offered by the company in 1999 and this has come to play an important part in the company’s ever-increasing range of products.

The firm has never been content to rest on its laurels (plastic or otherwise!). In 2000, the business of St. Ives-based moulder Permanex was acquired and, closer to home, Rutland Plastics bought the next-door Coats Viyella factory. Although there were no specific plans to develop the site at that stage, this purchase opened the possibility of future expansion without the need to move.

INVESTING IN THE FUTURE

Another, even bigger moulding machine was added at the start of 2005 (a BMB 1700-tonne machine with a 38kg shot weight) and, coinciding with the 50th anniversary of the company in 2006, plans were produced to begin redevelopment of the entire factory site. The company still employed around 110 people but turnover had grown to exceed £7million – a testament to the fact that Rutland Plastics is a forward-moving, thoroughly modern business with 50 years’ wealth of experience on which to continue building.  The noughties saw significant changes, the most outwardly visible is the redevelopment of the site. The first phase was the building of new offices and employee facilities along the front of the existing factory with work starting in mid-2007.

Once everyone had moved into this new facility demolition of the old offices began in June 2008. This made way for a new production bay to accommodate larger moulding machines, with work completed in 2009, however at this point, with the recession in full swing, the final phase was put on ice until the time was right.

Leaping forward to 2015 work commenced on a new 30,000 square feet warehouse. Following its completion at the end of the year, plans were put in place to move the toolroom to the old warehouse, along with the maintenance department. This would not only mean an enlarged toolroom making it possible to manufacture more mould tools in-house, but also free up space in the production area which would permit a more efficient layout and provide room for additional moulding machines in the future.

2019 saw the company break new ground with the introduction of collaborative robotics on the shopfloor.

Another major development was the introduction of an in-house prototyping service using a Stratasys Objet Connex 350 3D printer in 2011. Not only was this used internally and for existing customers, but was also made available as a bureau service. It is also used to manufacture assembly and QC jigs on a similar basis. A dedicated prototyping website was launched in April 2012 to support this service. The Connex has since been superseded by Fortus 380mc Carbon Fibre edition printer which enabled the company to print parts in 30% carbon filled nylon, and the material is excellent for producing end-of-arm tooling for the collaborative robots because it’s strong and durable but also lightweight.

Back in 2011 our design department also benefitted from the addition of Visiflow software enabling the simulation of the injection moulding process to help develop cost effective and reliable mould tool design, since then the design team have since moved on to using Moldex 3D software.

2010 saw the introduction of the Epicor ERP system which increased efficiencies by replacing outdated and separate systems with a single software package. This would also lead to the implementation of the Mattec machine monitoring system providing real-time production information and further efficiencies.

There continued to be investment in new moulding machines, both as replacements and additional machines. The total number of machines increased from 24 at our 50th anniversary in 2006 to 30 at our 60th anniversary in 2016. 2016 also saw the installation of 900 solar photovoltaic panels on the new warehouse roof which can provide up to 20% of electricity demand.

Rutland Plastics has held the ISO9001 Quality Standard since 1989 and with the environment being increasingly important the company was keen to demonstrate its green credentials, obtaining the ISO14001 environmental standard in 2008. With an increasing amount of work being undertaken for the medical and related industries we then worked for and attained the medical ISO13485 standard in 2013.

In 2021, our 65th anniversary year, we moved to a 24/7 production operation and it also saw us being named as Processor of the Year at the Plastic Industry Awards. We don’t know what the next 65 years will look like, however, we still intend to be a key part of the plastics industry and still firmly rooted in Rutland.